BRITISH VIRGIN ISLANDS, June 27, 2016 – O’Neal Webster partner Christopher McKenzie, a well-known name in the BVI trust market, has been ranked in Chambers and Partners’ inaugural High Net Worth Guide, published June 2016. Based in O’Neal Webster’s London office, he is one of only three attorneys recognized for Offshore Trusts (Expertise Based Abroad) in the British Virgin Islands. The HNW Guide is Chambers’ first publication aimed at the international private wealth market. The Guide recognizes law firms and their trust and estate professionals who provide quality wealth planning and tax counsel to their clients.

McKenzie advises on all aspects of the BVI law including trusts, wills, and estates. According to Chambers, sources say he is “…the guru of the industry. He’s very well versed in BVI trust law and helped draft the Vista trusts law.” He remains well known for his “very good technical knowledge” and is “a real star.”

“We congratulate Chris in this notable achievement, being ranked among the top trust and private client attorneys in the world by Chambers,” said Kerry Anderson, O’Neal Webster Managing Partner. “It is an honor for our firm, our private client practice, and all of our attorneys.”

Chambers rankings are compiled by full-time researchers who interview thousands of attorneys and their clients around the world. According to Chambers, “This intensive, continuous research identifies the world’s leading practitioners and law firms — those which perform best according to the criteria most valued by clients.”

Christopher McKenzie is the Head of O’Neal Webster’s Trusts & Estates Section where he advises on all aspects of law in trusts, wills, and estates. He is qualified in the British Virgin Islands, Anguilla, and England & Wales (non-practising) and holds an MA (Oxon) from the University of Oxford. He is highly recommended by clients, peers, and top industry ranking bodies alike, and is a sought-after speaker and delegate to international trust and estate conferences and seminars, also contributing to many highly regarded global publications.

Mr. McKenzie chaired the committee that drafted the proposals which led to the enactment of the Virgin Islands Special Trusts Act, 2003 (VISTA), the Trustee (Amendment) Act, 2003, the Property (Miscellaneous Provisions) Act, 2003, and the BVI’s regulations enabling exempt private trust companies to be set up. He was the founding chair of the BVI branch of the Society of Trust and Estate Practitioners (STEP), former chair of STEP’s Caribbean and Latin America Region, an emeritus member of the STEP Caribbean Conference steering committee, and served as a council member and director of STEP worldwide. Mr. McKenzie currently chairs the BVI Bar Association’s probate reform committee and was appointed by the BVI Government as a member of Team BVI, established to promote the BVI’s distinct financial services brand as a spokespersons and represent the jurisdiction on the international stage.

About Chambers and Partners HNW Guide

Chambers’ global reputation sets up Chambers HNW Guide as a key reference point for use by family offices and professional advisers to wealthy individuals, providing objective guidance on an international scale. It covers private wealth management work and related specialisms in key jurisdictions around the world, featuring in-depth editorial about the leading lawyers and law firms for wealthy individuals and families. Chambers HNW also features listings and information about many of the top accountancy and tax firms, private banks, wealth management firms, and multi-family offices acting for high net worth individuals. Access Chambers HNW Guide here. 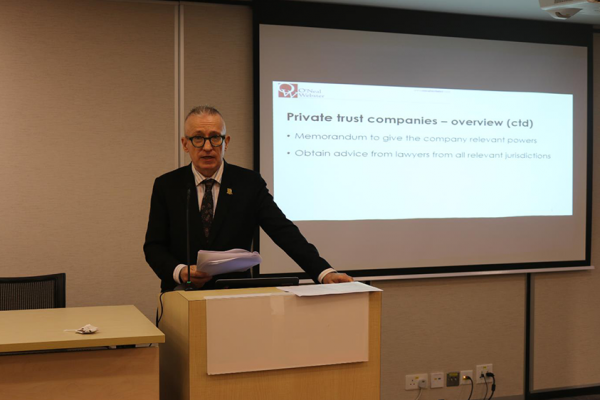